Ask Elijah Word what drew him into the singing, dancing and acting sphere, and the tall, lanky, nearly 28-year-old performer with deep familial roots in Broward County and performance chops earned throughout South Florida may regale you with this story.

“I’ve always been a singer, since I was about 3,” said the Fort Lauderdale native who grew up in Parkland. As a sophomore at Marjorie Stoneman Douglas High School, “my drama teacher saw me singing and said, ‘You have to audition for the drama class.’ I ended up doing Pippin, and I fell in love with theater right there.”

Ben Vereen won a Tony for his lead role in the original Broadway production of that show – a musical about a mysterious theater troupe that offers a tune-filled tale of a young prince named Pippin. Elijah said he once had a funky run-in with that famed performer.

“I saw Ben Vereen in New York, walking in to see Cat on a Hot Tin Roof. He was wearing a top hat and a cool, velvet blazer. I made eye contact with him, and I blurted out, ‘You’re the reason I do theater, you’re amazing, oh, my God!’”

Still shy of age 30, Elijah Word has crafted an extensive repertoire using his multiple talents. After winning a Carbonell Award in 2018 for Best Supporting Actor in the musical, Dreamgirls, at the Broward Stage Door Theater, “I jumped a ship,” he exclaimed. Quite literally.

“I did a couple of show contracts” as a vocal artist in the entertainment ensemble for a Bahamas Paradise Cruise Line ship traveling between the Port of Palm Beach and the Bahamas. “It was something I always wanted to get into.”

He appeared in shows on two ships, one, a Motown revue called “Soul of the City,” the other a rock revue called “Ballroom Blitz.” Following that, Elijah signed a similar pact with Royal Caribbean Cruise Line, but before his liner sailed, the coronavirus pandemic hit, halting all leisure traffic on the ocean. “I still have an open contract with Royal Caribbean,” he said.

“We met on Facebook. I know that’s such a millennial thing. We started talking online and eventually flew out to meet each other.”  Harry was an entertainer on a different ship for the same cruise line, so “we booked a cruise contract together.” They announced their engagement in December 2020 and plan to tie the knot “in a year or so.”

“We haven’t seen each other in four months,” Elijah said in a telephone interview last month, a few days before embarking for the UK. When they do marry, the couple plans to take the surname “Hylton,” to honor Elijah’s grandfather, “who died with no sons,” and his mother. “It’s her maiden name.”

The exceptional showman had just finished filming Rock Odyssey at the Adrienne Arsht Center in Miami when he journeyed back to England.

The Arsht has been presenting Rock Odyssey live for the past 10 years as a historic musical/literary piece for elementary school pupils around Miami. He said as many as 25,000 youngsters a year normally come to the performance center to see the show that presents Homer’s “Odyssey” in a live stage show specifically for kids. Actors in era costumes sing and act out the famed Greek tale.

The Arsht canceled its performance last year because of COVID. And this year, the program was filmed and will make the rounds of area schools to bring kids a contact-free slice of Greek history. “It’s an amazing show. I saw it years ago,” said Elijah, who said he got the gig by “just applying. I haven’t done children’s theater at the Arsht in years.”

One of the other players in Rock Odyssey, singer/actor Gaby Tortoledo, particularly enjoyed working with Elijah. “He is such a wonderful energy to have in the room. And his talent can be spotted from a mile away.”

“He has a stunning presence on stage and an even more striking voice,” she added. “I am sure a long and successful career is still ahead of him, whether in the US or the UK. Watch out, West End!”

Elijah noted that everyone in the cast this year had to be vaccinated against COVID. Personally, he said he received the Pfizer shots, and encourages others to get a dose of any coronavirus vaccine. “You have to follow the science.”

The South Florida singer/actor’s work in musical theater has been drawing attention, particularly during the last half-dozen years. He gained considerable notice as a background performer in Sounds of Simon, a compilation of Paul Simon tunes, featuring vocals and dances by performers gathered in a schoolyard setting – as in “Me and Julio down by the Schoolyard.” With his exceptional voice, he was soon delivering the poignant finale song, “Bridge over Troubled Waters,” with passion.

A stint in New York took him out of the area for a while, but he returned to take roles in Hair, Evita, Memphis, Hairspray, La Cage aux Folles, among others, and appearances in the Kevin Black musical, Swing, Swing, Swing, at the Broward Stage Door Theatre in 2016 and 2017.

In fact, it was Black who convinced him to accept the role of James “Thunder” Early in Dreamgirls. Initially, Elijah said he didn’t know if he could handle it. “It’s a big role that’s vocally exhausting.” 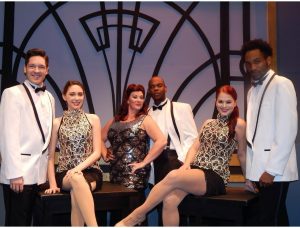 But Black continued his urgings, and Elijah took the encouragement to heart. His portrayal of the R&B artist who displays moves and swagger inspired by James Brown, Little Richard and other rockers earned him praiseworthy reviews and the Carbonell win.

He went on to appear as TJ in Sister Act at the Wick Theatre. Reviewer Christine Dolan heaped praise on the budding performer’s portrayal, calling it “a breakout performance for the actor who moves like Gumby-meets-Michael Jackson and mines every moment to maximum comic effect.”

A self-described extrovert and “goofball,” he said he occasionally lapses into seriousness between long stretches of silliness. “I got it from my mom,” Simone Hylton, owner of the Natural Trend Setters salon in Margate who gained some fame of her own by introducing a line of hair care products, “Royal Coils.”

Not all his roles have had comic charm. Eljah played against type in The Life, a sordid musical tale about the hookers who prowled Times Square circa 1980. “It was tough. I was just a baby, about 20. It was the first time I ever had to play a bad guy, a sleazy kind of guy. My mom came to see it, and her jaw dropped. Ironically, a lot of people in the cast were my close friends.”

The COVID pandemic forced most actors to abandon their favorite venues. Elijah said he “spent most of the COVID time in England. There was no work at all. What kept my juices flowing was doing a lot of things online.”

As the pandemic waned and vaccinations became more common, shows slowly began to open. Elijah kicked off summer 2021 in Raisins in a Glass of Milk at the Renegade Theater in Lauderhill. “It’s a show about racial equality and the African-American experience,” he said. The one-act production is made up of writings from artists of color. It was staged live and was also streamed online.

Next, he got a call from writer/director Amy London – “she’s like a second mother to me” – asking him to appear in a show she wrote, Story of a Life, at Broward Center. The cast included Amy’s daughter, Emily Tarallo, and her ex-husband, Barry Tarallo, along with other familiar regional performers, in a live show.

He wrapped up Rock Odyssey before flying to England.

Just days after his arrival, he contacted South Florida Theater Magazine to confirm he’ll be starring as Lola in Kinky Boots Dec. 17-Jan. 2 at the Broward Center for the Performing Arts. Tickets go on sale Aug. 19.

Other productions, he said, “are in the works.”

A Massachusetts native who moved to Florida in 2000, he is a graduate of Northeastern University in Boston, with honors degrees in English and Journalism. In New England, he worked for the Attleboro (Mass.) Sun Chronicle and the Pawtucket (R.I.) Times, the latter for 28 years. After moving to Florida, he worked as a copy editor at the Palm Beach Daily News, and, in 2001, became a reporter and later, city editor, at the Boca Raton News where he worked for eight years.

OUT NOW!   An exclusive interview with CHURCHILL

Some Monday Motivation to remind you that you ARE

Remembering those we lost. Honoring the heroes of

DON'T MISS THIS! We featured Carey Hart in this mo

The Impracticality of The Modern Day Mastodon is a

THE PRODUCERS DESK! Make sure to read this issue

IN CASE YOU MISSED IT!!! Make sure you read The A

MIAMI CITY BALLET IS BACK! Check out this story

IN CASE YOU MISSED IT!!!! Our Spetember issue is